May 17, 1997: Preliminary and unofficial Results

The sheep at this trial were very light (Barbs and Barb crosses) with astonishing jumping ability (one came very clse to getting over a 6 foot plus fence - repeatedly.) Most of the dogs were used to working much heavier, tamer sheep and tried to work too close in to the lighter sheep. As a result there was only one qualifying run in the started, intermediate and advanced classes combined. That dog, Jusdandy Brite Bernice PT, was by Ch Prelude's Key Factor UDX x Jusdandy Brite Spot CDX HS, owned by Laura Romanik and bred by Gary Frank. She took first place in Started sheep Division A (morning), and High in Trial on sheep

Several dogs were successful on sheep in the Herding Test and Pre-Trial tests. Those earning qualifying scores were:

Claudia Frank took several photographs of the action, as well as providing the photos on this page.


The ducks were much better working stock than the sheep, but for the most part the problems were similar - dogs working in too close to the stock.. Almost any stock will scatter under hese conditions. In addition a duck run that hugged the wall closely was almost imossible to get off he wall for a cross drive.
High In Trial on Ducks was Aberdeen's it's About Time CDX (by Signet Jus for Kicks x Aberdeen's Carry On CD), owned by Mary De Pouw. This dog was from Started Herding Division B (afternoon) with a score of 82 1/2. 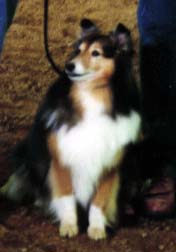 Reserve was Earl's High Spirit UD HX (Rhine's Homer x JC Lady Honey) with a division A score of 79 from Advanced Herding Division A (morning). There were no lother qualifying scores in the Duck Trials.

3 dogs passed either the Herding Test or the Pre-Trial test on ducks: