Why such a strong and early prohibition on a single color? My guess (and it is only an unprovable guess) is that the Shetland standard was written by men who knew of or suspected a cross to a brindle dog of another breed, and the prohibition was aimed at eliminating the results of that cross. The most likely source of brindle would have been the Scottish Terrier, and an attempt to get rid of terrier type would be understandable. Another possible source would be the Cardiganshire Welsh Corgi. 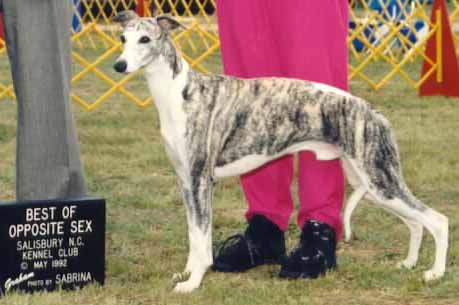 The fawn in this dog looks a little on the light side, but you can still tell the difference between the fawn background of the brindling and the white (white factored?) markings. Note that in this short-coated dog the striped effect is very easy to see.

Brindling on a long coat would look a little different. The Dutch Shepherd is a breed that combines brindle with a long working coat. Mieke Clemens gave me permission to reproduce one of the pictures from the Dutch Shepherd site, which shows two Dutch Shepherds, one gold brindle and one silver brindle. 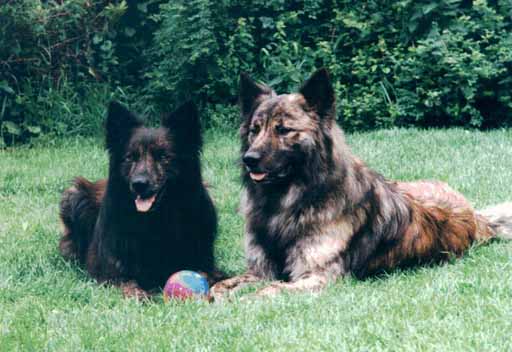 If you mentally add white markings, reduce the size, and change the head (and ear) type, this is probably a fair representation of the color of a brindle Sheltie.

Genetically, brindle was long assumed to be in the same series with mask factor and recessive red. Little suggested that four alleles existed in the series that produces brindle - normal extension (the preferred gene in Shelties), mask factor, brindle, and recessive red. The assumption is that mask factor and brindle do not dominate each other - if both are present, the dog is a masked brindle, like the Mastiff below.

This has now been disproven, and brindle assigned to a new locus, together with dominant black and non-brindle. Brindle still appears to be dominant over non-brindle - that is, a brindle dog bred to a dog with no brindle ancestry at all will produce either 50% or all brindle, depending on whether the brindle carries non-brindle as well. This sounds as if the brindle gene should have been eliminated in Shelties as soon as the ban went into effect, as a brindle has to have a brindle parent. Of course, there's a catch. Brindle produces soft-edged black stripes on the dog, and you can't see those stripes on a black background! Remember that in the early Shelties, black (with or without tan and/or white) was the commonest color. Brindle cannot be detected in a black. In a tan-point dog (black and tan or tricolor) it results in brindling of the tan points, and thus can be detected.

The Sheltie breed went through a period when blacks without tan points were strongly discriminated against. During this time, brindle would have been obvious as brindling on the tan points, or on the face of a sable. The current black/blue merle and white lines (bi-blacks and bi-blues), which can hide brindle, are recessive black and trace entirely to sable, tri and blue merle ancestors, any of which would have shown the brindle gene if they carried it. So brindle should have been eliminated from the breed.

With this in mind, it was somewhat of a shock to the Sheltie world when a brindle Sheltie pup showed up in a pet shop, probably from puppy mill breeding. The general feeling among serious Sheltie breeders has been that there was a cross to a breed carrying brindle somewhere in this pup's ancestry - that it is not a purebred Sheltie. This is in any event probably the most undesirable color known in Shelties, and the only one that has been barred since the very beginning of the breed. One possibility is a cross with a longhaired whippet, a "Silken Windsprite" (whippet registrations pulled by the AKC on the grounds that they were in fact Sheltie-whippet crosses.)

There is and has been some misinformation on brindles, including some coming from the AKC. For years the AKC Dog Book had a statement that the first Sheltie registered in the United States was Lord Scott, a golden brindle. Right dog, wrong color - Lord Scott was registered (in 1911) as a sable. Unfortunately the error propagated onto the AKC web page on Shelties, though it has now been corrected online.

I know of one case where a quality dark mahogany sable bitch was unplaced by a judge (his privilege) and the judge told the handler he couldn't put her bitch up because she was a brindle, and they were barred by the standard. The bitch was not a brindle (I knew her fairly well), but apparently the judge was unclear on what a brindle was.