Figure 1 shows the parts of the shoulder assembly itself. The skeleton shown is a commercially articulated one, and it looks as if the upper arm was mounted at a far more extreme angle that the dog would have had in life, when the parts of the skeleton were held together by muscles and ligaments. 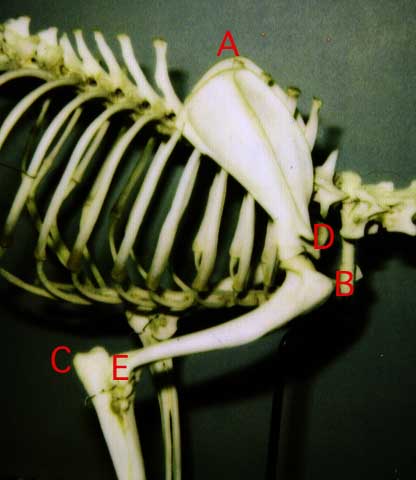 The red shading shows where the angle is measured. A 30 degree angle has a more upright scapular ridge than does a 45 degree angle.

The length of the humerus, or upper arm, is correctly speaking the distance from B to E.

The point of shoulder, B, is quite easy to locate on a live dog, as is the elbow, C. As far as length is concerned, the measurement from A to B is equal to that from A to D plus the thickness of the humerus; that from B to C is equal to that from B to E plus the thickness of the upper ulna (the longer of the two bones making up the lower arm.) If the thicknesses of the humerus and the ulna are similar, then comparison of AB with BC will give very similar results to comparing AD with BC.

The Sheltie standard does not actually give a correct length for the upper arm. It asks for a 45 degree slope to the shoulder and a 90 degree angle between the shoulder blade and the upper arm. This requires that the upper arm also have an angle of 45 degrees from the vertical, but says nothing about length. Hollenbeck's book, The Dynamics of Canine Gait, agrees with Rachel Page Elliot's Dogsteps in suggesting that the ideal for a all-around dog is for the scapula and the humerus to be approximately equal in length.

If the bones are equal in length and the angle between them is 90 degrees, we can use the pythagorean formula to get the vertical distance between A and C. 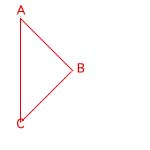 Remember "The square of the hypotenuse equals the sum of the squares of the other two sides?" AB2 + BC2 = AC2. Because AB and BC are the same, we can state that in the dog with shoulder blade and upper arm equal and a 90 degree angle between them, the distance from the withers to the elbow should be 1.414 (the square root of 2) times the distance AB. AC is somewhat difficult to measure, for two reasons. First, the dog can vary this length by opening and closing the shoulder angle, which is the major reason height is inexact. An excited stud dog will "stand tall", with the angle at B opened as far as possible and the angulation reduced. A very relaxed, slouching dog (or a border collie approaching sheep) will have the angle of the shoulder closed by gravity, and will appear to have nore angulation. Also, the measurement has to go around the curve of the dog's side.

I don't have a good reason, aside from assuming that the foreleg scales to the overall size of the dog and is proportional to the length AC, but I have found that my best movers have had very nearly the same length of forearm as the shoulder and upper arm length. This is the length CF in figure 2. 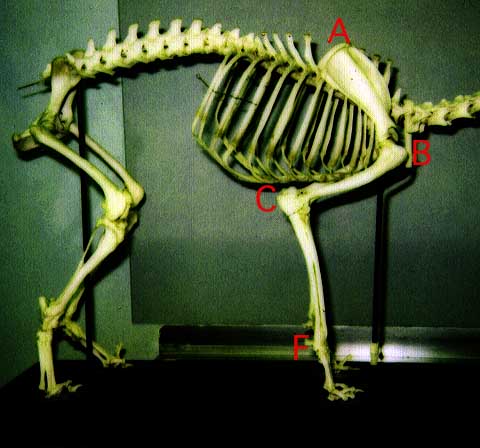 Note that the measurement is from the point of the elbow to the little projection at the back of the pastern joint, just above the carpal ball. My best moving dogs have had AB, BC and CF approximately equal in length, or with CF slightly longer. If CF is much longer, the shoulder blade and upper arm will generally be too upright, even if they are the same length. Many of the Shelties I have measured at shows have had BC an inch or more shorter than AB.