Can Ch Rogene's Sean Lord Derry CD TD Can CD was a mahogany sable and white dog, bred by Norene and Roger Meltvedt and owned by Sue Ann Bowling (me!) He was the first dog from north of the Alaska Range (any breed) to earn a tracking title, though he admittedly beat the Lab he trained with by only twenty minutes and the luck of the draw for tracks. He was by Rogene's Tom Bombadiel CDX ex Rogene's October Octavia, Line CHE Part IId and Family 5 Part II, whelped November 1, 1975. I sent him to the rainbow bridge when throat cancer made it impossible for him to breathe in the spring of 1987. He earned titles in all three of the fields in which an AKC title was possible for a Sheltie at that time: conformation, obedience and tracking, and had two legs on his CDX (and a good start on his Utility training) at the time he was retired due to jumping problems. On the basis of his favorite game (herding a soccer-sized ball back to my feet) and his interest in car chasing (and airplane chasing) as a young dog, I suspect he would have done well at herding, had it been an option then. 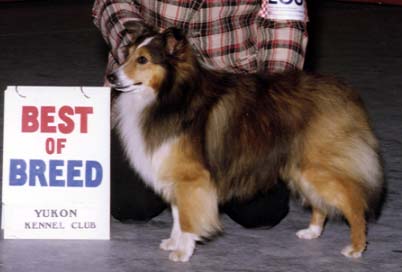 First dogs are always special, I suppose. This whole web site owes its existence to Derry, who got me into bloodlines in the process of researching his pedigree, and into dog psychology in the process of trying to keep one step ahead of what Norene always referred to as her juvenile delinquent Sheltie. He was a very special dog, and after ten years I still miss him. So to keep the length of this page under control, I'm putting more about Derry elsewhere.

Return to index of versatile Shelties