CH. Victory's Hidden Treasure CC, better known as "Vanessa," was bred by Vicki Janakos and was co-owned by Johanna Primeaux and Yvonnne Samuelson. She was shown primarily by Johanna Primeaux She is by CH. Westwind City Lights out of Cahaba's Dance In The Wind, born May 13, 1987. In 1990, she won the National Winner's Bitch at Denver, Co. In 1996, she won the National Best of Breed in Spokane, Wa. She holds the record for the most Awards of Merit, 5 years straight at the Nationals. At present her show career earned her Century Club title with 108 Best of Breeds. Also to her credit, Top Specialty BIS winner of all time with a record of 51 Specialty Best of Breeds along with 1 Best In Show (all breed) and 66 Group Placements. Her offspring include 2 champions and 1 ROM. She is Line CHE Part IIe and Family 6. 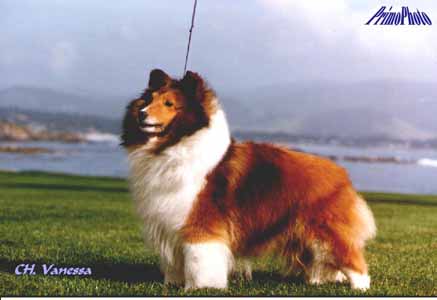 Pedigree
Back to ASSA Best of Breed Summary