Banchory High Glow was a dark sable bitch, bred by Mr and Mrs R. D. Olson (Banchory) from Am/Can Ch Banchory High Born ROM and a bitch from their original lines, Banchory All-A-Glow. She was whelped May 6, 1971. At the time she was being bred from, three of the most rapidly rising stars in the breed were Ch Halstors Peter Pumpkin ROM, Am/Can Ch Banchory High Born ROM, and Ch Cherden Sock it To 'Em CD ROM. High Glow was related to all three and produced well to all three. To her sire, High Born, she produced the non-Champion ROM Banchory Reflection ROM. To Peter, who was closely related to her maternal granddam, she produced 3 Champions, one of them a Register of Merit sire. Her 4th Champion was sired by Am/Can Ch Cherden Sock it To 'Em CD ROM, whose dam was linebred on Ch Thistlerose Arcwood Aladdin. She made a significant contribution not only to Banchory lines, but to many other kennels as well through such descendants as Ch Banchory Back Stop ROM, Ch Macdega Proof Positive ROM,and Ch Banchory Formal Notice ROM. She is Line CHE Part IIb and Family 12 Part III. 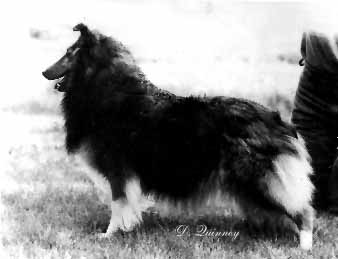