Inverness Yarrow appears in the March 1910 Kennel Gazette - one of the earliest Shelties registered. He is listed as being bred by Mr. C. F. Thompson, his sire being Inverness Hoy (unregistered) and his dam Inverness Patricia (unregistered), and was whelped April 21, 1909. He was the first registered dog in Line IH (Inverness Hoy).

Inverness Yarrow's picture was selected to depict the "Shetland Collie" in a series of silk cigarette cards depicting top winning dogs of a number of breeds. Nora Merhar obtained one of these cards and scanned it for me. 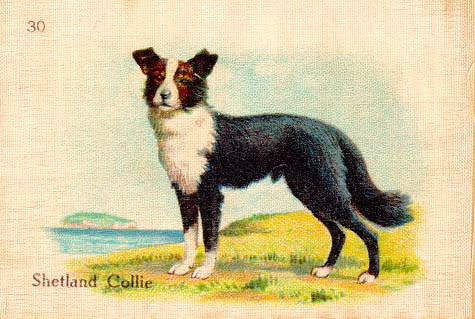 Inverness Yarrow sired the first Sheltie in the Stud Book, Kilravock Laddie 155T, the sire of UK Ch Walesby Select 1517AA and of another son, Pedro. Pedro was the sire of Farburn Dinnah or Dinah, a key bitch in Family 1. Yarrow also sired Hailes Princess, who effectively headed Family 11. Although this family is apparently extinct as a female line today, it produced the enormously important BB sire, UK Ch Eltham Park Eureka.

UK Ch Walesby Select was imported to the US, but never sired a puppy that bred on here. He was more successful in his original home, where he sired the dogs Benvolio and Barham Twostroke, as well as the bitches Barnston Cressida and Brendagard.

Benvolio sired Gorse Cressida of Houghton Hill, who was behind the very successful Family 8. This was one of the main Houghton Hill families, producing among others Ch Dancing Master of Anahassitt.

Brendagard appears in Family 12. Her daughter, UK Ch Kilravock Goldfinder 761KK, produced Kilravock Maree, in turn the dam of Michelmere Subhainn who is behind UK/US/Can Ch Crag of Exford.

The English Shetland Sheepdog charts show Inverness Yarrow as a black and white, although both Inverness Hoy and Kilravock Prince are listed as tricolors. Although the cigarette card image does show considerable tan on the head, the distribution around the eyes is not typical of a tricolor, nor is the apparent lack of tan on the lower hind legs.